I’ll update this thread throughout the summer – bookmark it and check back for updates!

I’ve been growing cucumbers for a few years now.  My wife really hates seeds in her cucumbers, so we usually get English Cucumbers when we buy them.  I have a spot in our yard where I’ve grown cucumbers – it’s a small area near the house with full sun.  I didn’t have an actual trellis, but I found that tomato cages worked fairly well to start, but then the vines do pretty quickly outgrow the cages.

For this year, I bought an actual cucumber trellis – I ordered this one on Amazon based on reviews and size. 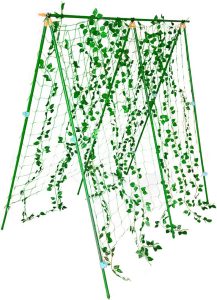 This A Frame style trellis is supposed to be good for cucumbers.  The vines will grow up the trellis and the cucumbers will hang down, growing straight.  Ideally.

I looked up all the different varieties of cucumbers seeds they had at my local Home Depot.  There are plenty to choose from, but for this year I selected the Green Dragon Hybrid cucumber seeds.  Ferry-Morse brand.

Green Dragon Hybrid Cucumbers are a burpless variety that is supposed to be good for slicing and eating fresh.  They claim that it is “sweet and never bitter”.  Based on the photos, it looks like the seeds are very small.  It’s described as straight and 14 inches, but I tend to pick cucumbers before they get full size.

I’m a little worried that on the Home Depot website, these seeds have a 1 star rating – two users said they grew lemon cucumbers instead of the Green Dragon, and another person said there were only 5 seeds in the package.

Last year I actually started some cucumber seeds indoors and then transplanted them.  I got pretty lucky last year, as several websites suggest that cucumber seedlings don’t transplant well.  This year I decided to wait for warmer weather and just planted them in the ground. 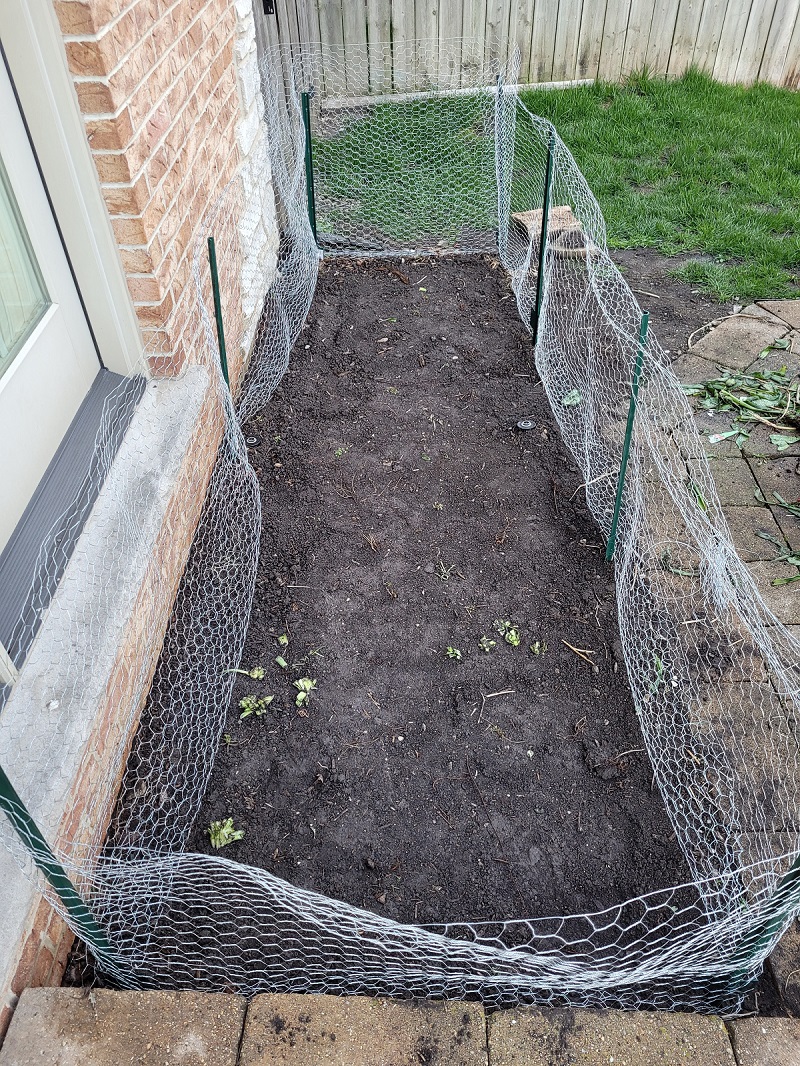 I didn’t do the best job clearing out the area, but there was a lot of left over debris.  My wife has insisted on keeping bulbs in the areas where I plant vegetables and I know that just takes away nutrients.  But happy wife equals happy life.  I did remove a few of the bulbs but others I just cut down as they had already flowered.  In fact, most of the bulbs this year got eaten by animals before they flowered.

Here’s my thoughts on chicken wire.

So, I built the fence and planted the green dragon hybrid cucumbers on May 7, 2022.  The Ferry-Morse seeds had a whopping 10 seeds in the pouch!  Actually, I knew that was a possibility and I didn’t think that’d be an issue, as I only want maybe six cucumber plants in the space that I have.  Last year I grew three cucumber plants and that even took up the space.  This year I have the taller A frame trellis, so I think I should be able to manage six plants.

Unfortunately, only three of the 10 seeds have germinated.  In the past I have initially grown cucumbers in small pots indoors and then transitioned them to outside, mainly to try to keep animals from eating the small plants.  They did seem to transfer okay for me, but I was worried they wouldn’t as I’ve heard that isn’t always successful.  And of the three that germinated, two of them are a bit close together.  Just my luck. 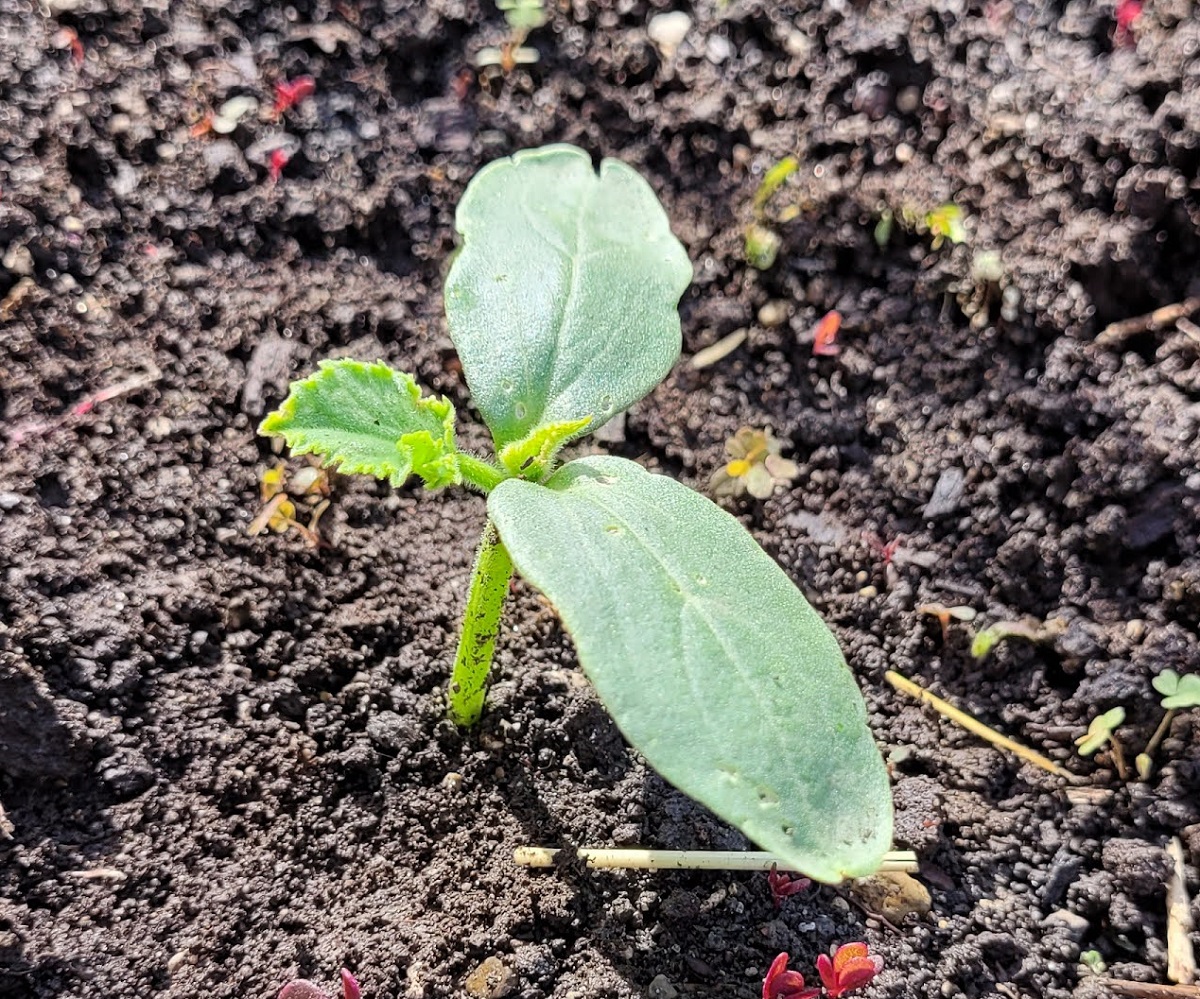 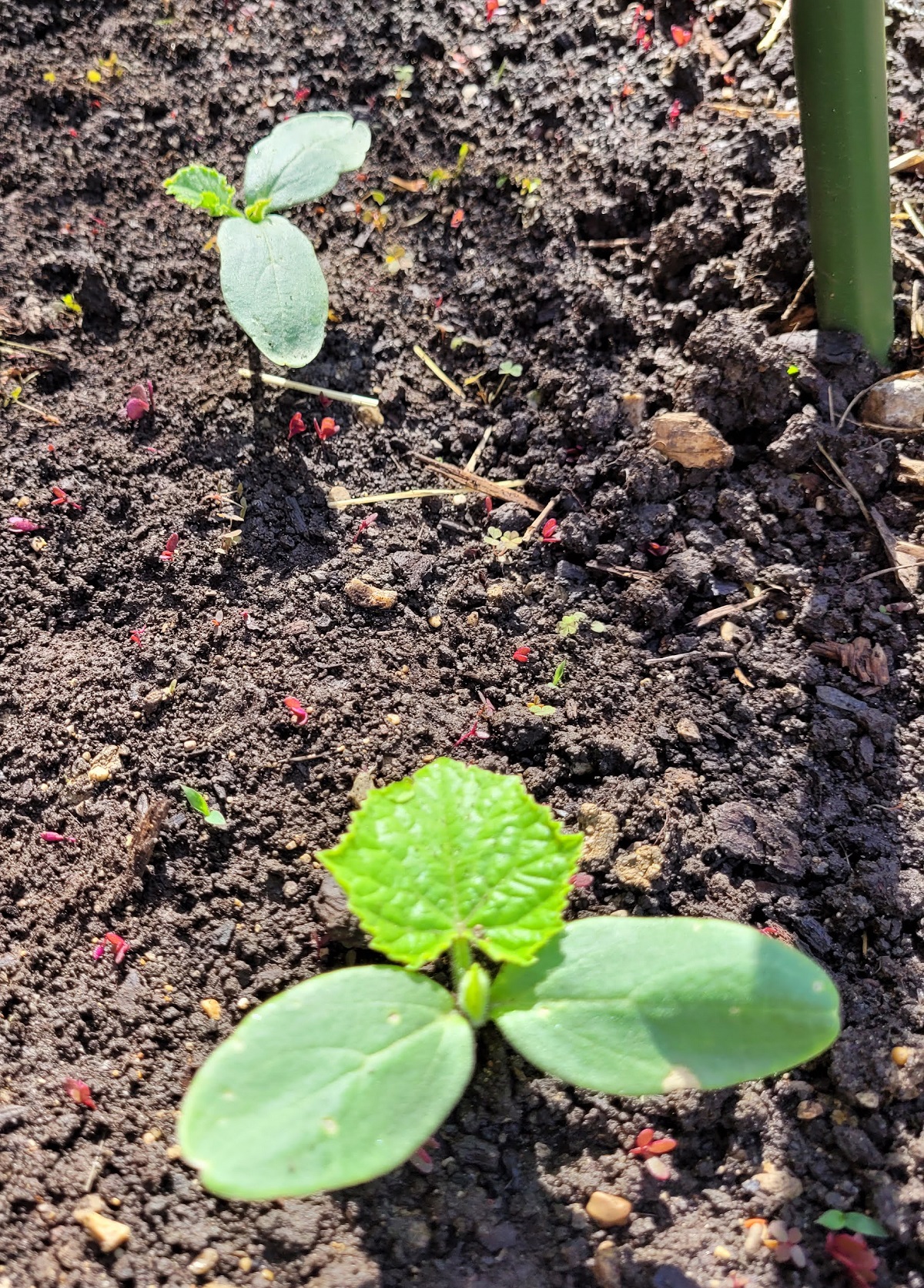 So we’ll see how these three plants do.  I have placed the giant A frame trellis inside the chicken wire, but I haven’t draped the netting over it yet.  I still may want to easily get into this area to do some weed control.

I went back to Home Depot to buy some more seeds but they were all out of stock.  I wound up buying some “Tendergreen” burpless cucumbers to plant.  Hopefully cross pollination between the two types won’t create any problems in the cucumbers that grow.  I planted the tendergreen cucumbers today.   I planted eight seeds with the plan to have four plants at the most of tendergreen.  As I was packing things up, the rest of the seeds spilled out of the package.  I wasn’t about to try to put them back as they were on the moist soil.  I just went ahead and buried them into the soil too.  I can always remove them if too many grow.  Once they’ve grown, I will make a post about them.

I haven’t updated throughout the summer, but I’ll add all my photos and comments now that the growing season is just about over.

First, here’s a photo of the trellis frame: 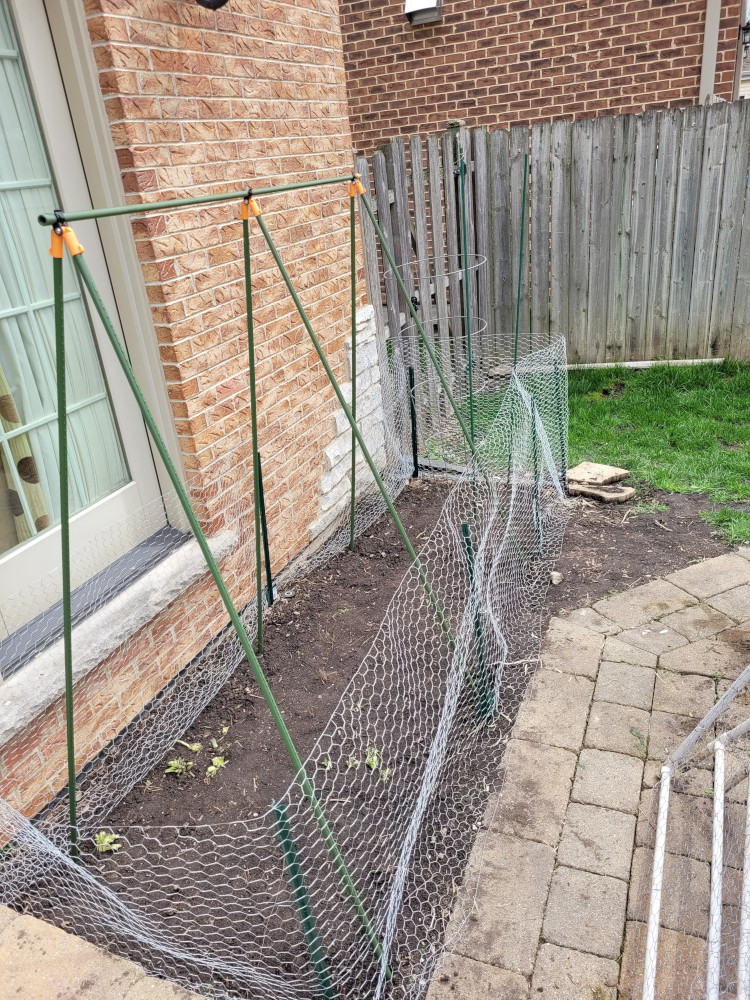 I wanted to get the trellis frame into the ground before the cucumbers got too big, to make sure that I wouldn’t hurt the roots pushing the poles into the ground.  I am overall very happy with this trellis.  It was very sturdy, didn’t shift at all during the season, and was easy to set-up.  Some of the photos below will include the netting.  I didn’t want to put the netting up until the cucumbers got a big bigger, as I thought the netting would make it harder to get in and remove weeds.  For whatever reason, this season was TERRIBLE for weeds.  I’m not taking responsibility for not weeding as well as I probably should have. 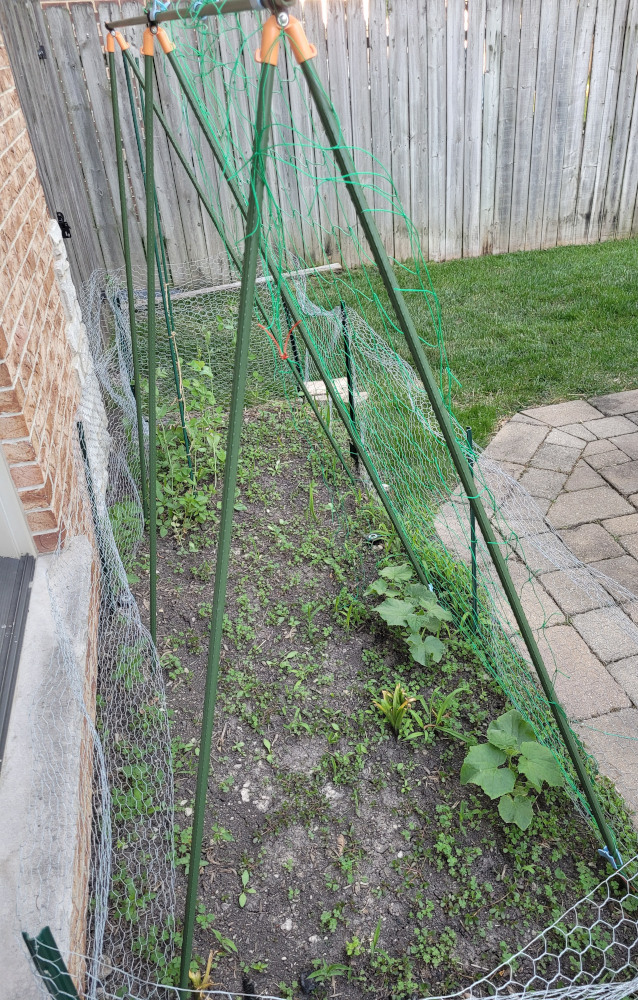 Here you can see the trellis after I added the netting on the north facing side.  You can also see what looks like two of the small cucumber plants on the bottom right.  Actually I got three of the green dragon hybrid cucumbers to germinate, out of about 10 seeds that were planted.  Of course, two of them were close to each other and the rest didn’t germinate.  I am not sure why I had such poor germination of the cucumber seeds.  I had figured the chicken wire would have prevented the usual animals like rabbits and squirrels from eating the seeds, but perhaps squirrels still could get in.  And I also realized that birds may eat them.  In the past, I think that I grew the cucumbers in pots indoors first, or just bought baby plants to transfer into the garden bed.  As you can see, the garden bed was already starting to grow lots of weeds and crap.  I should be embarrassed to post those photos, as they are pretty unsightly, but it also taught me an important lesson for future summers – using weed fabric when possible.  Our garden beds are a bit unusual and less than ideal in that we also have other bulbs that my wife didn’t want me to remove.  It is what it is – trying to grow ornamental plants along with edible plants is just what we’ve done.  Not recommending it, but it can be done.

You can also see in the back-left of the photo are the sugar snap peas that we grew.  They did okay, but also not great this year. 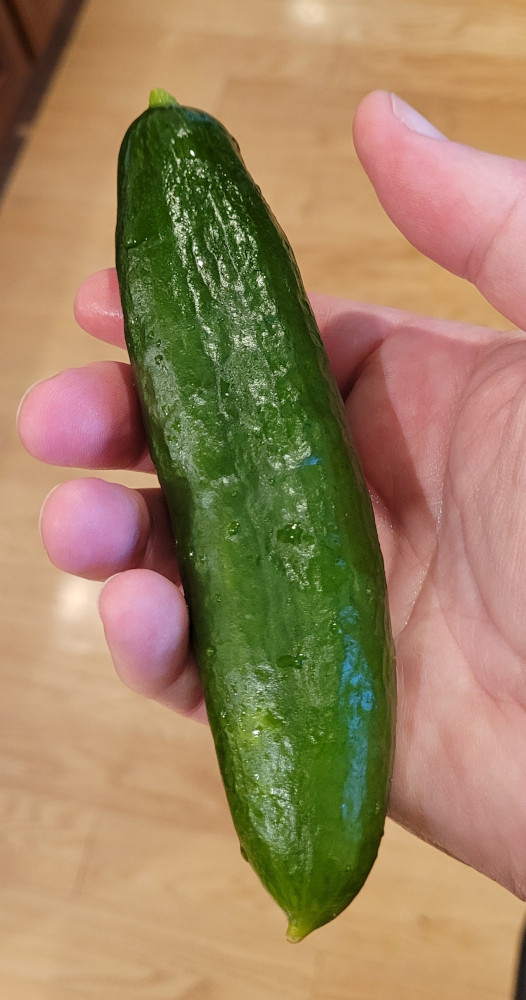 I’d say throughout the course of the summer we got maybe two dozen similar cucumbers to what is shown in the photo, from the 3 plants that germinated.  They were all similar in size and taste.  Everyone seemed to like the taste.  I selected them hoping they would be essentially seedless, but they did have small seeds, especially if they got to be as big as what I’ve shown in the photo.  Here’s a picture of one sliced up: 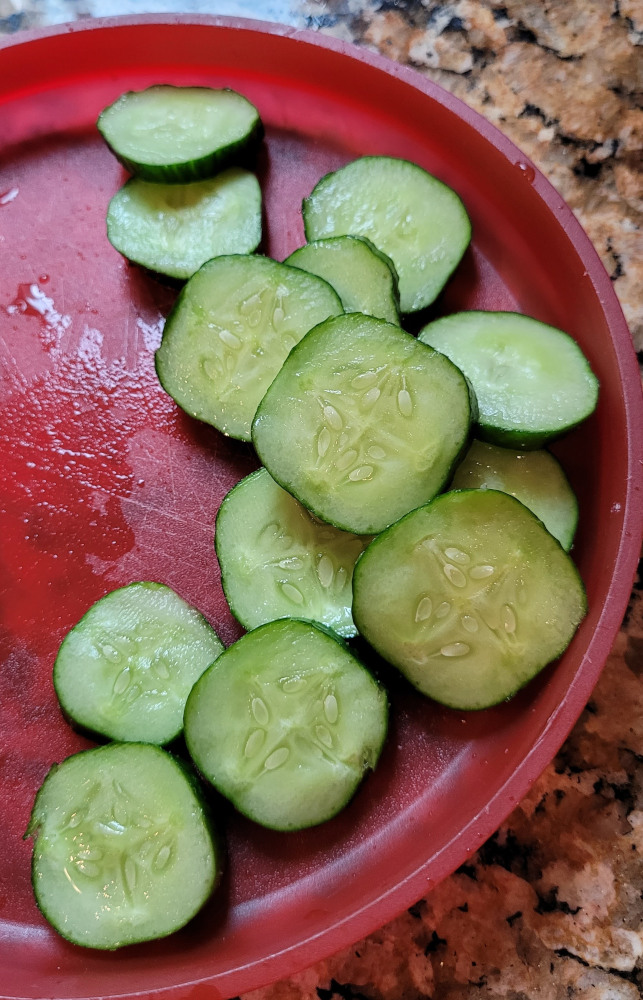 You can see that there are some seeds, but they are small.  For next season, I will have to do an earlier search for the most seedless cucumbers that taste good.  If you have any suggestions, please add it in the comments!

Here is one hanging on the trellis in early August: 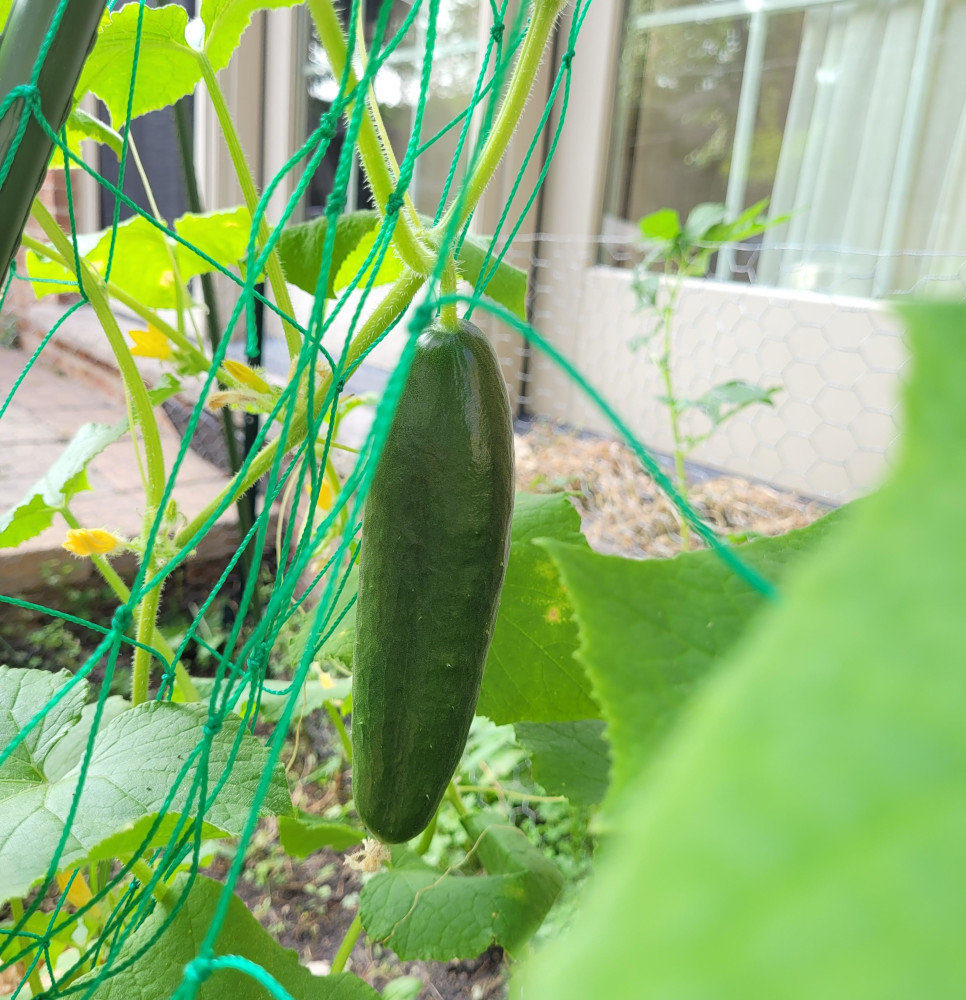 And here are some growing in the first half of September: 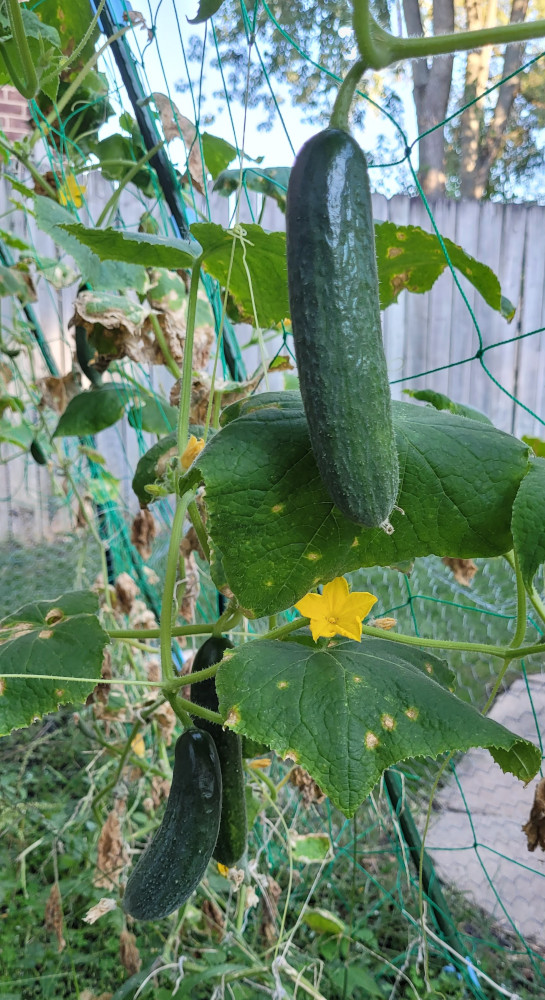 So there is the update of how the 2022 cucumber growing season went.  The Tendergreen cucumbers that I planted shortly after the Green Dragon Hybrid did not do well at all this year.  The vines were thin but did flower and a few cucumbers did grow, but not as many as last year.

As for things I plan to do differently for next year: