I planted some bare root raspberry canes one month ago, on June 2, 2016.  I previously explained why I chose to plant Joan J and Anne raspberry varieties.  I posted a one week update and now it is time for a one month update.

As I explained previously, I planted two rows of bare root raspberry canes, with a mix of five Anne and eight Joan J.  I wanted to alternate them when planting, but I lost track of which was which in the pale after the first two. One of the rows gets slightly more sun than the other.  I planted seven plants in the row that gets more light and it seems that four of those are Anne and three are Joan J.  The first plant to get decent growth got destroyed by rabbits twice and now doesn’t seem to have any growth.  That’s one of my Joan J’s that doesn’t look like it’ll make it.  After the second time it got destroyed I put up chicken wire to keep the critters out. There is another cane in the sunnier row that didn’t seem to ever get any growth. I’m pretty sure it was a Joan J, so that’s two Joan J’s down.  One of the other plants in that row got eaten by rabbits, but it has come back with a little growth so I’m hoping it survives.

To summarize, the sunnier row of plants started with seven, but one got eaten and another never grew.  Of the remaining five, it looks like four of them are Anne and the other is a Joan J.

In the shadier row, I planted six plants.  They all had some growth but one that had nice leaves coming out of the stem suddenly wilted overnight. I think that one was the only Anne planted in that row.  I have no idea what happened as the plants around it are doing fine.  That row appears to have five reasonably growing plants.  One in that row had a new shoot break but has continued to have new growth so I think will be fine.

Plant that was doing fine one day before it drooped and wilted away. 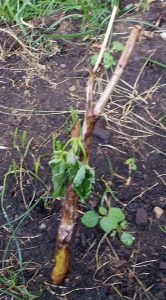 The same plant one day later. The leaves wilted for no apparent reason and never recovered. Plants around it are fine. 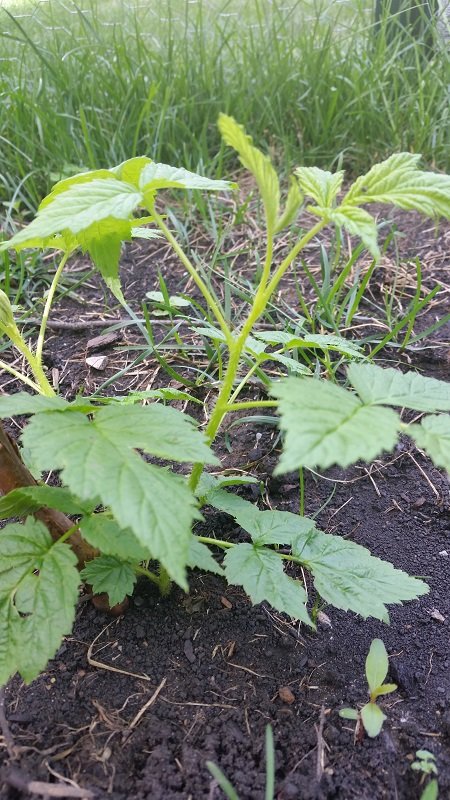 One of the Anne plants that is doing well. If you look closely at the stems, it looks like there are little hairs. The Joan J doesn’t have that. 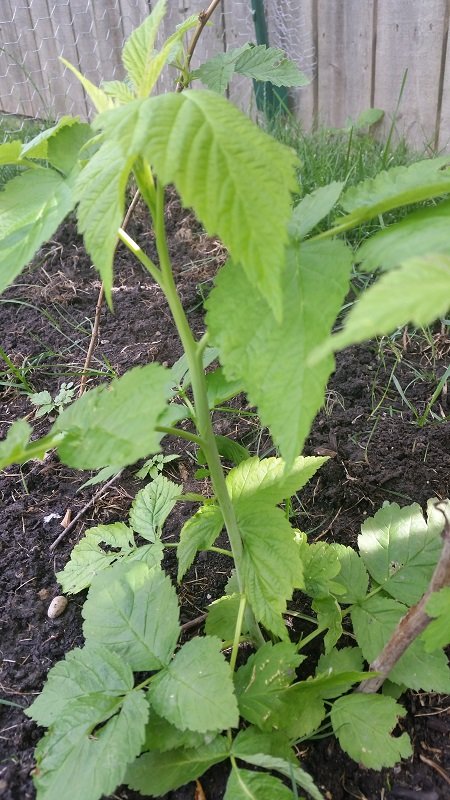 One of the Joan J plants that is doing well. Unlike the hairy stems on the Anne raspberry plants, the Joan J has smooth stems. This plant is currently about one foot high.

This is an overview of the row of plants in the shadier spot, one month after planting.

This is the row of plants in the slightly sunnier area about one month after planting.