After selecting my Anne and Joan J raspberry canes for their flavor, productivity, and being thornless (turns out Joan J are thornless, but Anne have “mild” thorns), I placed my order from Nourse Farms.  Nourse Farms is one of the few places that repeatedly gets mentioned as a place to order bare root raspberry canes, and other berry plants. I liked that the orders came 5 canes to an order, as I decided on planting two rows of canes, with 5 canes per row.  I was ordering late in the season (order placed 5/24/16) and you select the week you want the plants shipped, leaving their site on a Monday (or Tuesday in the case of Memorial Day).  My order came to $49.95 total, including shipping.  I selected for the order to be shipping on 5/31/16. In the meantime, I removed the grass from the area I would be planting the canes.

I received notice on Tuesday 5/31/16 that the order shipped and they included the FedEx tracking number.  I received the shipment two days later on Thursday 6/2/16. 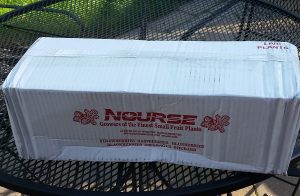 I wanted to get them planted right away, figuring this would give me the best chance of success.  The package included a very detailed planting and care guide for all berries.  They also included a small package of Agri-gel (more on this later).

The raspberry canes were packaged in two clusters – one for the Anne raspberries and one for the Joan J raspberries. Each cluster was packed in a plastic bag along with moist shredded papers.  The first thing I noticed was the impressive root system attached to each cane, especially compared to the lack of almost any roots on the Home Depot bare root cane I bought earlier this year.  For the most part, the Anne canes looked similar to the Joan J canes, but they were clearly marked in each bag. 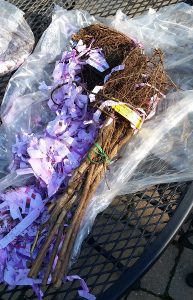 As all of the recommendations had suggested soaking the roots for up to two hours before planting, I had a pale ready.  It was barely big enough to fit the 13 bare root canes.  That’s right, not 10, but 13.  It turns out Nourse sent an extra three Joan J canes, although one was more of a twig than a cane.  Still a nice bonus that I had to now factor into my planting plan.

The packaging explained to add the Agri-gel to a bucket of water and then dip the roots in the slurry before planting.  I initially assumed Agri-gel was like fertilizer, similar to the powder you add to flowers you put in a vase.  Agri-gel is actually these absorbent tiny gel balls (for lack of a better term) which absorb water and then release it gradually, acting like a moisture bank.  Rather than dipping the roots in the slurry, I actually wound up soaking them while I prepared the ground. 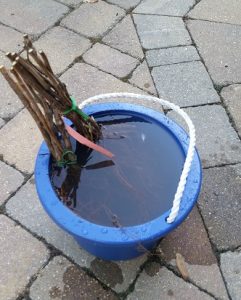 13 bare root canes soaking in a pale with Agri-gel. The large roots barely all fit.

Being a skeptic on artificial substances, I wanted to see if there was any testing on the safety of Agri-gel when used on plants that would be producing consumed fruit. There is too much speculative information for me to include in this post, but perhaps some day I will write a separate post on the safety and effectiveness of hydrogels. Bottom line is that I had already used it and I hope they are safe. What I found won’t stop me from eating any raspberries that grow.

While the canes were soaking, I dug two trenches for planting. I dug them about 3 to 4 inches deep.  The suggestion is for the roots to be planted about 2 inches below the surface – raspberry roots are apparently very shallow.  Also, I read that the new canes will grow from the roots, so having them more shallow makes it easier for them to break through the surface. 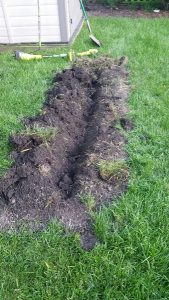 One of the trenches just before planting the bare root canes.

Of the two rows, one gets more sun than the other, due to a tree that casts shade over the area in the morning.  I spent some time considering which roots I’d put into which row.  I assume the area that gets more sun will be more productive and the berries may taste better. I also assume that the Joan J plants will be more productive. So, which canes do I want to give the best chance of success?  I really want to have the great tasting Anne berries, but I don’t know if those canes will produce enough to satisfy my family. My wife suggested I plant some of each in each row.  I’d tried to do some research on planting different varieties in the same row and I didn’t find too much clear information. There was nothing to say they wouldn’t grow.

The main criticisms in planting different varieties in the same row were that it can be difficult to tell which raspberries come from which variety. In my case, it should be easy to tell as the Anne berries will be yellow versus the Joan J will be red. Another concern raised was that if you didn’t like one of the varieties, you couldn’t just remove the entire row and start over. I’m not too worried about that.

There was some concern that one variety may be more aggressive and take over, pushing out the less aggressive variety. That may be a real concern. I’ll hopefully have some experience to support or refute this, but it may take a few years to know.

So my plan was to alternate plants, putting three Joan J and three Anne bare root canes in the row that gets more sun, and then the remaining five Joan J and two Anne in the row that gets less sun.  Unfortunately, as soon as I took the bands off of the canes holding them together in the pale, I wasn’t able to tell them apart! So after the first two canes got planted, I had no clue which ones are which.

I wound up planting them a little closer together than I initially anticipated because of the extra Joan J plants Nourse Farms sent to me. They wound up being about 12-18 inches apart. As suggested, I set each plant in an L configuration. In other words, the cane was at one end and all of the roots for that plant trailed behind in the same direction. I’d then set another cane with the roots trailing behind in the same direction. Because of the very long roots, some of the canes were planted around where the previous plants roots ended.  In one video I watched online, it was actually suggested to do this with the idea that some of the canes probably won’t survive and this way the remaining ones will be about the right distance apart. I’m thinking that advice doesn’t make much sense, since each plant having plenty of space for the roots is probably a better plan. Because of space limits, my plants are a little cramped.  I’m guessing it is a good problem to have gotten plants with such long roots that they become cramped. 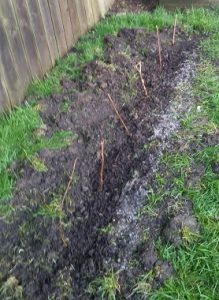 Seven bare root raspberry canes freshly planted. Excess Agri-gel I poured out of the pale is visible to the right of the plants. This row is the area that will get slightly less sunlight. My crappy preparation is clearly visible with the patches of grass that were still there. 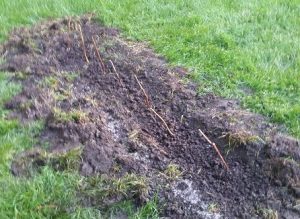 Six bare root raspberry canes freshly planted. Excess Agri-gel I poured out is visible to the left of the plants. This is the area that gets slightly more sun.